Juici Patties in the USA: The Franchise Opportunity 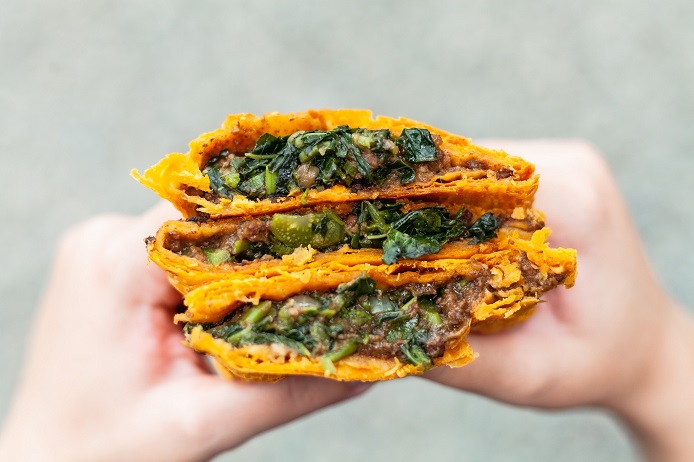 American investors love the idea of getting in on the ground floor of a franchise opportunity. Good timing often means a faster potential return. Gaining the first solid foothold in the market can be priceless for brand recognition.

That’s why investing in Juici Patties in the USA is such an amazing opportunity!

What is the Juici Patty?

The Juici Patty closely resembles the empanada, which has origins in Spain and Portugal. The empanada first appeared in a cookbook filled with Catalan, Italian, French, and Arabian foods in 1520.

The empanada is a flaky pastry crust filled with meats and vegetables designed to be portable for working people as a handheld, hearty meal. The seasonings are widely variable, as are the fillings. In Galicia and Portugal, an empanada is typically made with seafood, chorizo, or pork loin.
Between Galician immigrants and Spanish colonists, empanadas have been made popular in Latin America and the Philippines, and they remain so to this day.

The Juici Patty shares similarities with the empanada, such as the flaky, pastry crust that is baked around a savory meat filling. The spices are distinctly Jamaican, however, and bring the flavors of Caribbean cuisine to life in one bite.

As a franchise, we are ready to bring Juici Patties to the US. Our menu for our American customers will include beef and chicken juici patties, coco bread, Jerk chicken, and Jerk chicken salads. We’re excited to share the tastes of the Island with American consumers who may not have experienced the flavors of Jamaica!

When Juici Patties founder Jukie Chin was just 16 years old, he perfected the recipe for the beef Juici Patty in his parents’ kitchen. They were so savory and delicious, that Jukie’s parents sold them in the family grocery store. Customers loved them so much that the first Juici Patties restaurant opened in the 1980s with only three employees—a baker, a cashier, and Jukie himself.

In 2001, Juici Patties became the first fast food franchise to open locations in all 14 Jamaican parishes. Now, there are more than 60 locations, and Juici Patties are available in grocery stores in Canada, the United Kingdom, and countries around the Caribbean.

Be the First to Invest in Juici Patties in the US

Jukie Chin’s son, Daniel, joined Juici Patties in 2013, and he’s ready to bring Juici Patties to the US with franchise expansion plans already kicking off in Florida.

All over the United States, consumers are more interested in ethnic cuisines. A 2018 study found that 87% of Americans want ethnic foods with authentic flavors, and of those people, 32% are willing to pay a premium to get those cuisines.

But why Florida? Because the market there embraces diverse cuisines. Floridians have embraced the flavors of Cuba and the Caribbean already. Then there’s a robust market for Brazilian and Argentinian foods, as well as those from closer to home, like Southern barbecue.

This diversity of culinary choice has made Florida a foodie hotspot, both for tourists and residents. This is a feature, not a bug, which gives the state a leg up as a place to introduce a new cuisine such as the Juici Patty.

However, Florida is just the beginning of our expansion plans for Juici Patties in America.

How Much Does a Juici Patties Franchise Opportunity Cost?

The Juici Patties franchise investment is a unique opportunity because we recognize that one size does not fit all.

Maybe there’s a perfect location for a Juici Patties franchise opportunity that will suit a specific size of the restaurant. Or perhaps a franchise owner of Juici Patties in the USA has certain goals for their franchise investment that will be more quickly met by a particular format.

This is why the Juici Patties franchise is available in three different restaurant formats. The investment estimates vary with the size as follows:

These estimates do include the $30,000 franchise fee and the expectation that a certain amount of liquid capital is available to be invested at strategic intervals, particularly in the beginning as the franchise is being built-out and prepared for opening.

Support for Investors of Juici Patties in America

This includes offering expert advice on site selection and built-out to support the restaurant format chosen. Once your site is chosen, we’ll also offer advice with design, which helps accommodate the drive-thru, carry-out, or dine-in needs of your franchise location as well as infusing your Juici Patties with that signature Jamaican island flare.

We can also provide extensive training to give you everything you need to smoothly operate your Juici Patties franchise on a day-to-day basis.

Is this Franchise Opportunity Right for you?

Our seasoned franchise development team is here for you and all of our franchise owners to answer any questions you may have and assist with the daily operations of your Juici Patties investment. Included in that is marketing support beyond your grand opening with the intention of building the brand recognition of Juici Patties in America.

We’ll help you with both local marketing campaigns as well as regional and national strategies to bring the Juici Patties name to households across the United States.